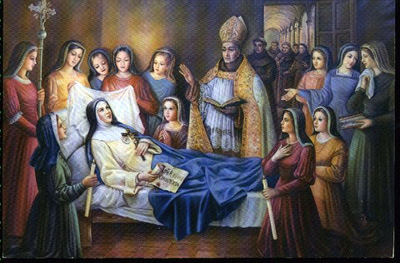 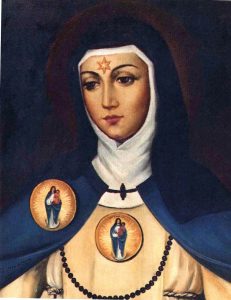 Beatrice, born in 1424 and daughter of a Portuguese lord and lady, was taken to the Court of Castile by her aunt, Queen Isabel. But the girl’s loveliness of body and soul made the Queen so jealous that she had Beatrice thrown into prison. God was on her side, however. While locked up, the Blessed Virgin Mary appeared to Beatrice and told her she would one day found an order in honor of the Immaculate Conception. Then God freed her miraculously. Not wishing to stay near her aunt for obvious reasons, Beatrice fled to Toledo, where a community of contemplative nuns sheltered her. For the next forty years, she lived and worked there as a servant. Her deep prayer life carried her through these long years of waiting for the new community to develop.

Finally, in 1484, the friendly daughter of Queen Isabel offered assistance for this venture and gave her the Castle of Galliana to be the first house of the new community. Our Blessed Lady again appeared to Beatrice wearing a white habit with a blue mantle. Beatrice and her followers adopted this dress and started the Order of the Immaculate Conception, receiving papal approval in 1489. A month later, the day before her community was to emit vows, she passed away, her work complete.

The Conceptionists, as they were called, became a distinct branch of the Poor Clares five years later, when they came under the influence of the Franciscan Cardinal Ximenez de Cisneros, Archbishop of Toledo and took a modified form of the Rule of St. Clare. Perhaps the most famous of Beatrice of Silva’s spiritual daughters is the mystic, Venerable Mary of Agreda, who recorded her private revelations in “The Mystical City of God.” Another Conceptionist Nun, Mother Mariana de Jesus Torres (1563-1635)was a Spanish sister at a mission monastery in Quito, Ecuador. She received visions of Jesus, St. Francis, and her Foundress. She also received visions of Our Lady of Good Success, who prophesied about much of the havoc to occur in our own times.