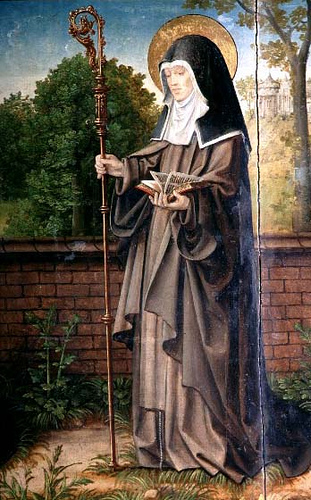 Known For: being the most famous of St. Clare’s biological sisters and her first follower

Fun Fact: Once she though she’d spent only an hour praying when it had really been three days!

There’s speculation that Catherine, St. Clare’s younger sister, was named for St. Catherine of Alexandria, an ancient virgin martyr well revered in the Middle Ages. Regardless, Catherine (known as Agnes in religious life) certainly followed the early martyr’s spirit, although embodied in a different way. Catherine of Alexandria shed her blood for Christ, while Agnes of Assisi spilled “the more noble blood of the heart” for Him by a life of radical obscurity as one of the first Poor Clares.

Agnes was just 14 when her older sister Clare did the unthinkable: run off and consecrate herself to God, following St. Francis’ spirit but with a more contemplative bent. We sometimes think of the Poor Clares’ beginning as something well-thought-out and standard, but it was anything but: all Clare had when she promised Francis obedience was a penitential robe and an ardent love for the Poor Crucified Christ. Though her next steps were far from certain, this love gave her enough direction to move forward, and she prayed Catherine would share the same joy. Prayer works: Catherine stole away and joined her only days later, becoming Clare’s first disciple (and the Patroness of all Poor Clare Sisters in formation!)

The family was hostile to the girls’ choice. Clare showed them her shorn head and they left her alone. But Agnes hadn’t cut her hair yet, which meant she was still marriageable. This also gave the attackers something to grab. They dragged her away by her luxurious tresses, tearing some out in the process. Undeterred, Clare prayed, and Agnes became as if “she [had] been eating lead all night” (according to an early biography).The brutish men couldn’t budge her body from the ground. Her furious uncle tried to stab her, but a searing pain prevented him. Clare begged them to leave and this time they obeyed without hesitation.

Agnes (presumably returned to a normal weight) then donned the same penitential dress as Clare. St. Francis cut her hair himself: Clare may not have enjoyed the same privilege. Then he named her Agnes, after Christ the Immolated Lamb (Agnus in Latin).

Thus began a long life of religious pioneering. Francis eventually sent her to found monasteries at Montecelli, Venice, and Mantua. Agnes, “extremely distressed and saddened,” felt the separation from Clare with “immense sadness” because “what shall I say, now that I can no longer hope to see my sisters again?” as her only extant writing says. Still, she powered on by courageously leading the new sisters and uniting her sufferings to those of her beloved Lamb of God. Occasionally she was consoled by special mystical graces, such as holding the Infant Jesus on Christmas. Most of her life, however, was lived in humble fidelity to little things.

Agnes exaggerated her situation: Providence ordained that she would be present at Clare’s death. Then she followed her into eternity almost as quickly as she had joined her in religious life. It seems this was her destiny: Clare (from the word for light in Italian) was brilliant and dazzling, and Agnes, radiated the glow of her sister in its original purity. She’s a good intercessor for overcoming obstacles to vocations and for staying true to the Franciscan ideal.

St. Agnes of Assisi is a common namesake for Poor Clares and has been the subject of many an artistic piece. Here is a poem excerpt by the Poor Clares of Rockford:

O Agnes, most faithful and constant in courage

Inspire with love of Christ, strong and devoted,

Many young Agnesses of today.