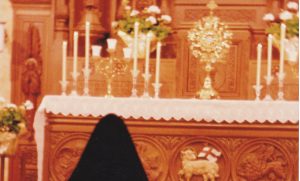 Anne-Marie de Maledent de Meilhac, the Bordeaux Parliament counselor’s daughter, entered the world February 12th, 1644.  As was common at the time, she was sent to be educated by her Urbanist Poor Clare aunt at a very young age.  Perhaps she’d always had a desire for religious life herself, perhaps she was planning on getting married… regardless, she made up her mind on December 8th, 1858.  On that day, which would later be the feast of the Immaculate Conception, Jesus made known to her that she was called to enter religious life and start a Poor Clare monastery of the Primitive Observance (following St. Clare’s way of life more closely).

Though she was only 14, she set about this great work with the help of a local bishop, writing Constitutions to help her sisters know how to follow the Rule in their time.  On August 12th, 1659 (the former feast of St. Clare), she took the habit and received the name “Sister of Calvary” in her new monastery.  She professed vows as a lay sister (what today we would call “extern sisters,” those Poor Clares who don’t take the vow of enclosure so as to help with the monastery’s needs outside the cloister), but out of obedience to her superiors a year later, she became an enclosed nun.  Her humble, hidden, but bold life of service to the Lord came to an end of April 7th, 1673.