Chosen (Custody of the Eyes) is a feature-length documentary, a coming of age story of “Heather” as she films her journey into an 800-year-old religious order. Set within the highly insular realm of the Corpus Christi Monastery, Chosen forms a portrait, through self-scrutinizing video recordings, of a former blogger and painter confronting what she believes is her calling: Becoming a cloistered contemplative nun. Chosen focuses on Heather as she becomes “Sister Amata.” (Both names are aliases she selected to reflect the Poor Clare Colettine value of hiddenness and anonymity.) This collaborative film grants viewers a unique encounter with an otherwise remote realm.

In my interdisciplinary relationship- and research-based artistic practice—a hybrid of experimental and documentary filmmaking with oral history and ethnographic methodologies—I focus on primary oral cultures and enclosed communities. I am interested in the liminal phase or transformation within a rite of passage; the construction of individual and cultural identity; and the performances of social roles.

Since 2005 I have worked with a cloistered contemplative community of Poor Clare Colettine nuns in Rockford, Illinois. I arranged at that time to meet a young woman considering joining the community. For six years, she hovered along a psychological edge, encountering the possibility that she had been chosen, by God, for a radical, countercultural life. In 2011, she entered the Corpus Christi Monastery.

In Chosen, “Heather,” who has made an exodus from our world, in the process of becoming “Sister Amata,” a member of an ancient religious order. Just as the enclosure is an intermediary physical space, in which the nuns mediate on behalf of humanity to the divine, believing that their prayers and penances can change the course of history, Sister Amata inhabits a threshold—a space between worlds.

My collaborative practice was extended in Chosen to a “visual dialogue” to embed, materially and formally, the tensions and negotiations of a para-ethnographic documentary. ​

​I obtained permission to lend “Sister Amata” a video camera and acted as a director with this subject-collaborator cinematographer. Viewers are granted her vantage point of “Sister Amata” during her interior journey into a new social role, identity, and culture.

In a sense, this film focuses on the Female Hero’s Journey. An underlying theme is universal—how we parse destiny and agency in our lives.

Cloistered nuns remove themselves from the world in order to mediate on behalf of humanity through penance and in prayer. The video camera also mediates, provoking and recording action with cinéma vérité, intimate confessionals, and direct cinema to yield contradictory and complicated public-private performances.     The film, at points, mirrors “Sister Amata’s” own disorientation as she inhabits a liminal phase, attempting to assimilate into a heterotopia. The viewer might not apprehend immediately what she is witnessing; this reflects the very common experience of the nuns’ own confusion as they attempt to adapt to the self-built subculture.

Parts of this film might be challenging for viewers, as scenes extend what one might anticipate and require sustained attention, or mindfulness, as small actions unfold in real time. This choice was made to allow viewers to enter into the pace of monastic life, where members seek the divine in the ordinary and mundane. 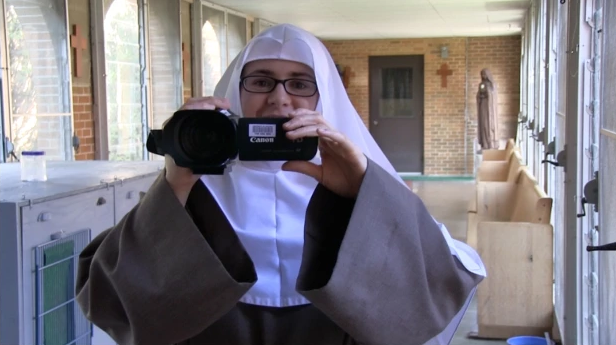 More About This Project See the Documentary Photo Exhibit

The following photos displayed on this site were provided and are exclusively copyrighted by Abbie Reese from her exhibit Erased from the Landscape.

For more information on this site, please click here.