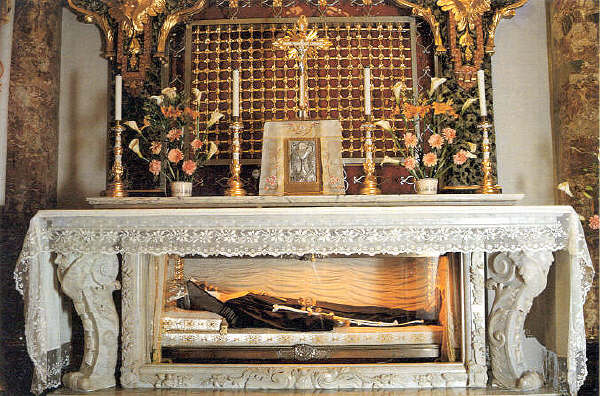 Blessed Mattia Nazarei
Born: 1253, Matelica, Italy
Died: December 28th, 1300, Matelica, Italy
Fun Fact: Bl. Mattia’s life mirrored that of St. Clare in many respects besides simply sharing the same life and charism. She ran away to a monastery at a tender age, immediately sheared her tresses and donned the habit, resisted the drastic attempts of her relatives to remove her, and served as abbess for a considerable time. 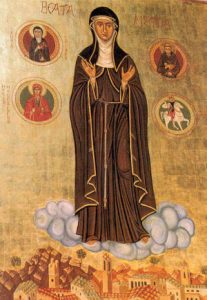 Blessed Mattia, whose name is derived from the Hebrew meaning “given by God,” was born to aristocratic Italian parents in 1253. Perhaps the significance of this year escaped her parents at the time, but every Poor Clare remembers this was the year St. Clare died. Little did anyone know this little baby would grow up to emulate that great but simple abbess.

An only child, Blessed Mattia grew up, according to one account, “humble and intelligent,” a rare and attractive combination. Naturally, her parents hoped to arrange a successful marriage in the world for her. But she spent long hours in the chapel of the local Poor Clare monastery and eventually decided this life of penance was her calling. Despite family opposition, she ran to the monastery and begged admittance. She was refused: one account says the abbess was Mattia’s aunt and wouldn’t accept the girl without parental consent. Persevering in trust that this was God’s call, Mattia went to the chapel, cut off her long blonde hair and said this prayer:

“O Jesus, my most sweet Lord, aid me by Your light in this trial that is delaying my entrance into Your sanctuary. I am, O Lord, Your creature and You are my Creator; You have made me in Your image and likeness, and so I pray You not to abandon me. You know that for Your love I have renounced the riches and joys of the world; (…) solely in order to serve You with my whole heart. In You, O Lord, I have placed all my hope.”

After this, the abbess admitted her. Despite her temporary removal due to legal action by her guardian, this monastery would be her permanent home.

Mattia grew “in grace and wisdom and knowledge before God” like her heavenly Spouse, and eventually became abbess. She would hold this office for 46 years (until her death). Considerable work was done during her term –  the monastery and chapel were both rebuilt – but the interior work she did for souls by her charitable service far surpassed any earthly accomplishment, however monumental.  She also possessed the charisms of healing, prophecy, and even turning spoiled wine into the best vintage.

When her end drew near, she told her sisters, “It is time to go to the Father.” She truly grasped the reality of heaven: after the example of Christ in his Last Discourse, she knew we come forth from the Father and return to the Father (cf. John 17). This is our destiny and our only ultimate joy. Then after exhorting her community to faithfulness to their chosen way of life, she said, “God is love!” and commended her soul to God.

She was beatified in 1765 after developing a pious following. Many including, interestingly enough,  the Protestant King George III of England (the British monarch during the American Revolution), encouraged this to happen. Napoleon’s troops stole her incorrupt body in 1811, but it was returned a few months later to Matelica, where it rests to this day. In 1972, a sample from the red liquid that periodically comes forth from her body underwent a hematological study. It was found to be human blood.

Many miracles have been worked through this blood over the centuries. Truly we are living in an age of miracles, for the case being examined for her canonization at the time of this writing (which involved the blood) is from 1986: the cure of a Neapoletan pharmacist from terminal carcinoma. Blessed Mattia, powerful with God, pray for us!