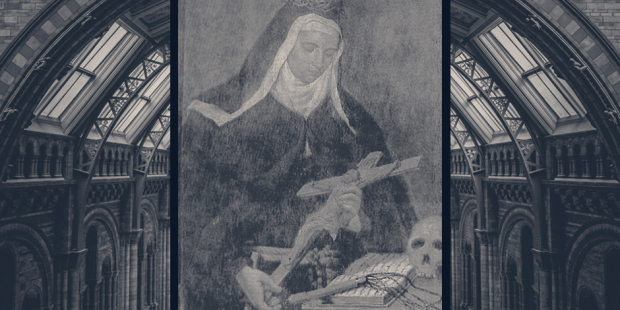 Margaret Martinengo was born on October 4th, St. Francis’ feast day. Perhaps this foreshadowed her vocation to the women’s Order started by the Little Poor Man of Assisi! She was attracted to the intensity of religious life at a young age, though it seems she struggled with it: one old biography describes her moral dilemma when she had both a breviary (the official Catholic prayer book) and a two-volume collection of romance vying for her attention! Nevertheless she conquered all interior and exterior difficulties and entered the Poor Clare Capuchin Monastery of Our Lady of the Snows in Brescia in 1705. 18 years later she was chosen to become novice mistress and later abbess. Although Margaret (now known as Sr. Mary Magdalen) enjoyed some renown as a spiritual guide and possessed the gift of prophecy, most of what made her life great were the hidden elements. Some of these jewels have come down to us in a rich legacy of writings. Although most of her work still awaits translation into English, enough can be glimpsed of her beautiful personality from what is available.

She was endowed with a thoroughly Trinitarian spirituality, a most basic and regretfully overlooked reality. Like Christ in his Last Discourse, Bl. Mary Magdalen demonstrated by analogy that we are all journeying back to the Father, our origin and source: “Rivers return to where they come from.”

She calls merely emotional spiritual enthusiasm “a fire of straw…try to light a fire in a bundle of straw and suddenly you’ll see, oh, what great flames! But scarcely has it gone up than it burns out…. True fervor consists in the will to attend to [the work of sanctification] even when the heart feels like ice.”

While counseling her sisters about the frequent spiritual problem of not speaking enough with God and in turn believing he doesn’t speak enough with us, Bl. M. Magdalen said, “You think to yourselves that the Lord does not speak, because you do not perceive him by bodily hearing. But you deceive yourselves, because he has a voice that is sweet and gracious, efficacious and able to put into action whatever he says.” She recognizes that the heart can perceive silent but more intimate modes of communication, especially through Scripture. She goes on: “Do not be afraid of calling him father, spouse, heart, and life…. he is highly contented to be loved that simply, but with all one’s heart… he is not interested in half-hearts.”

She condemns a Pharisaical attitude sometimes seen among religious wherein they conduct themselves with great external composure but lack humility. “Know,” she has Jesus say in an imaginary dialogue, “that a humbug or a buffoon, speaking all day long of irrelevant things, pleases me more than such a silence….[which] is of demonic lineage…. Since I am truth itself and holiness and infinite simplicity, I abhor in the extreme anything artificial.”

She would place herself alongside Our Lady of Sorrows during Mass, immersing herself in the sacrifice of Mother and Son. To her, this practice seemed “excellent for the recollection of any distracted heart.”

Finally, here is advice from Bl. M. Magdalen received in prayer (the speaker is Our Blessed Mother but it is unclear whether it was a direct revelation or merely a meditation):

Daughter, love God with all your heart, soul, and strength. Do not scrutinize his greatness, but adore in silence his incomprehensible majesty…. It is true that I know more than all creatures. But it is also true that more than all creatures I understood and grasped that he is incomprehensible. So, fully convinced by this knowledge, I adored and loved his infinite majesty with deep silence and annihilation of myself. It is true that I received from him graces that cannot be communicated to other creatures. Do the same, daughter, and seek nothing else.