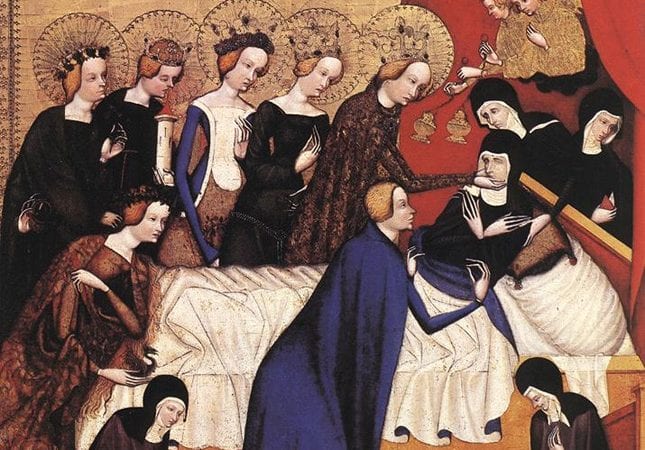 Died: c. 1550
Known for: her private revelations from St. Catherine of Bologna
Fun Fact: She had lively, playful conversations with Christ. When she would tell him, “My Lord, let me come to you,” he responded, “Come to me by good works and holy desires.” When called away from her cell, she told Our Lord, “Wait for me until I return,” and he said, “I wish to come with you.”

Bl. Julia, of the monastery of St. Ursula in Milan, is one of many Poor Clares whose lives are shrouded in mystery. But “mysterious” certainly doesn’t mean “boring:” though hardly any personal information exists about Bl. Julia due to records being lost during her monastery’s suppression (probably by anti-Catholic forces), most of what survives are her recordings of private revelations she received from St. Catherine of Bologna for about 30 years (Catherine had died about 50 years before the visions started). This extraordinary friendship developed into a close mother-daughter relationship. Catherine shared much timeless advice with Julia about the Poor Clare way of life, of which we share some highlights (along with Julia’s own observations):

1) Penance is an integral part of the Franciscan vocation, but excessive focus on external practices can mislead us into thinking we have mastered ourselves. Catherine told Julia: “There are different kinds of penance, corporal and mental. The mental is more toilsome, but is also of greater merit and more precious in God’s sight. Many can fast on bread and water, but are unable to bear a word that displeases them.”

2) Catherine also taught her the value of good company: “Just as persons banded together are harmed by one another, so people of virtue learn from one another, and become virtuous.”

3) Like any good Franciscan, Julia had a great love for the Christmas Season, especially the Epiphany. She says that “Just as the star gave great light to the eyes of those holy Magi, so the holy Scripture illumines the hearts of those who wish to find the beloved Spouse of their souls.” She also compares the religious vows of obedience, poverty, and chastity to the gifts of gold, frankincense, and myrrh. Obedience is like the gold setting for the jewels of our good actions.

4) She stresses the importance of gratitude for the incarnation in imitation of Mary, and espouses the popular Franciscan concept that “if our first parent had not sinned… God would however have become incarnate and live[d] among men…” Truly a thought-provoking statement.

Blessed Julia, powerful with God, pray for us!