Blessed Jolenta of Poland
Feast Day: June 12th
Born: c. 1235, in Hungary
Died: 1298, Gniezno, Poland
Known For: her good use of every situation she was placed in by Divine Providence 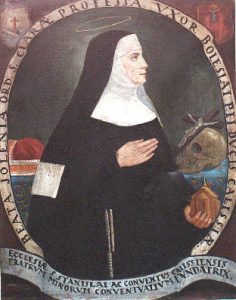 Jolenta, daughter of the King of Hungary (Bela IV) and granddaughter of the Emperor of Constantinople, was born around the year 1235. Her older sister, Saint Kinga (otherwise known as Cunegunda) of Poland wished to oversee her education, so at age five Jolenta moved to the Polish court. With a saint for a guide, she grew into a lovely and holy young woman.

After her marriage to Boleslaus, the duke of what was known as “Greater Poland,” she grasped the fleeting nature of this world’s goods. But instead of lamenting the pomp and affluence of her state in life, she lost no time in converting her desires into action. She and her husband mutually decided to put all their assets to good use in helping the disadvantaged and erecting hospitals, monasteries, etc. All this activity earned Duke Boleslaus the title of “The Pious!”

After a happy marriage and having three daughters, the duke passed away. Two of the daughters being wed, Duchess Jolenta and her third daughter abandoned their empire of pious deeds and vanished into the obscurity of a Poor Clare cloister at Sandec. Wartime difficulties necessitated her transfer to the Gniezno monastery (which she had helped establish with her husband years before.)

Although she thought nothing of her former lofty stature in the public square and she was more than happy to assume lowlier tasks, she was nevertheless elected abbess. Again, rather than bemoaning her present situation, she excelled in such humility that she was wont to deny her own preferences and she set about providing a good personal example and wholesome environment for the sisters that her community advanced to a high caliber of sanctity.

Though her virtue could not remain a secret and was well known beyond the cloister walls, she ever prioritized the interior life, especially by meditation on the suffering Christ. Once He appeared to her and warned of her coming death. Having been seized by a terrible illness, she received Last Rites, admonished her sisters to remain ever faithful to the Holy Rule, and went to her reward in 1298.

Later, when the abbess of her monastery was seriously ill, Bl. Jolenta and St. Stanislaus the Bishop, a popular Polish saint, appeared to her and cured her. Perhaps by offering up her own illness for love of Christ, she obtained the grace for this abbess’ recovery. Many miracles are reported at her grave to the present day.