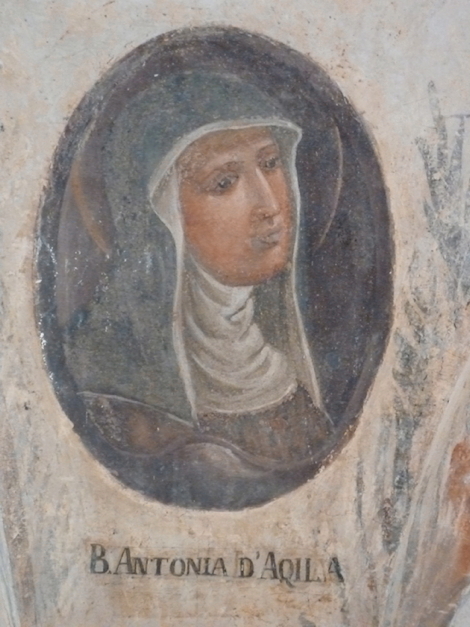 Bl. Antonia came from a privileged background and married young. Sadly, she was widowed at age 27. Instead of permanently bemoaning her fate, she chose to embrace a life of penance. She joined a Tertiary Institute founded by Bl. Angelina of Marsciano. Soon she became superior of the Institute’s community at Florence. A true mother of souls, her sisters grew in love and fidelity.

Fervent as this group of Tertiaries was, a desire for even more rigor, poverty, and withdrawal from society ate at her. She voiced this desire to St. John of Capistrano, the current Franciscan General and her spiritual director. St. John was heavily involved in the Franciscan Observant Reform, and supported her. In 1447 (the same year as the death of St. Colette and 19 years after her husband’s death), she professed the Rule of St. Clare and founded and assumed leadership of Corpus Christi Monastery in Aquila. Due to her involvement in establishing this community and being a fervent proponent of St. Clare’s Rule, she is numbered among the great 15th Century Franciscan Observant Reformers.

She and 12 women from her former community comprised the first group of sisters in Aquila. They had no trouble receiving vocations – in short order over 100 sisters populated the monastery! Their abbess, this humble widow, led them along St. Clare’s beautiful way. One of her outstanding traits was her way of drawing the sisters to a great love of holy poverty. She observed it in a way that was radical and uncompromising but devoid of any cold, pharasaical rigidity: a difficult but vital balance to strike!

Blessed Antonia contended with many difficulties as any saintly person does: harassment from relatives, great temptations, a long illness, etc. But instead of seeing these as a hindrance to the many great works entrusted to her, she united them with Christ’s sufferings, accepting them as special marks of God’s love. As a result, she achieved the highest union with God possible in this life.

At age 70 she stepped down from her position as abbess. When she died a year later, after a full life of serving Christ in varied and holy ways, many miracles occurred at her grave. It was almost as if Our Lord wished to say to the grieving sisters she left behind, “This brief separation will be repaid a hundredfold.”

St. Clare and Her Order by Anonymous. Published by Mills and Boon, Limited, 1912.