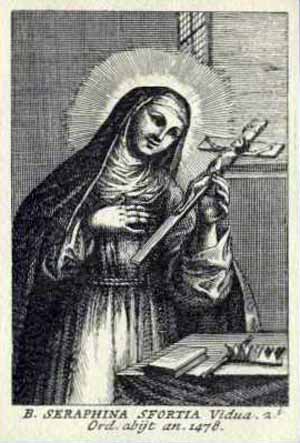 Known For: Her heroic response to unjust treatment

If a disgruntled husband presented himself at a Poor Clare monastery dragging along his wife and demanding that they make a nun out of her so his lax conscience will stop pricking him, what is the community to do? This is exactly what happened with Bl. Seraphina Sforza. Although her life was one endless litany of unfair pain and objectively bad situations, Jesus in his mercy led her to save souls through these very things.

Of noble stock and brought up in her uncle’s Roman household after being orphaned, Seraphina seems to have had an attraction to religious life from a young age. Nevertheless, she consented to an arranged marriage with the widowed Prince Alexander Sforza. She proved a devoted and capable wife and stepmother, receiving the intimate love of her husband and stepchildren.

Trouble arose when the Prince had to join his brother in a military pursuit. For six long years Seraphina managed domestic affairs with charity and practicality. Sadly, the proverbial business trip affair happened with Prince Alexander. He even brought his mistress home and made Seraphina their servant. Believing the best way to handle things would be quiet obedience, Seraphina meekly obeyed.

The Prince wasn’t at peace, though. Her authentic, devoted life gnawed at his conscience, and everyone loved her. What to do? He resorted to a practice not unknown in those days: throw her in a cloister and forget about her. Sadly, the nuns cooperated with this coerced entrance.

Seraphina served the sisters as a lay servant (an abuse of religious life and unheard of in 21st century Poor Clare monasteries!). Alexander wanted her to become a sister so as to be definitively rid of her. Although a submissive wife, Seraphina only did so when she felt truly called. How this was allowed to take place is unknown, as Church law only permits a married woman to become a nun if her husband has vowed celibacy, which Alexander certainly had not. Perhaps (the sources are unclear but seem to suggest otherwise) it happened after Seraphina’s prayer moved his cold soul to seek her forgiveness. He too gave himself to a life of humble penance, while his wife went on to become abbess of her community.

Bl. Seraphina’s life was riddled with abuse after abuse. In a sense, everything went wrong. But now she stands as a beautiful example of how even in the midst sin and scandal, “all things work for  good for those who love God” (Romans 8:28).

Bl. Seraphina died on September 8th, 1478, the Liturgical Memorial of the Birth of Mary. She would make a great intercessor for those suffering from domestic and clerical abuse.