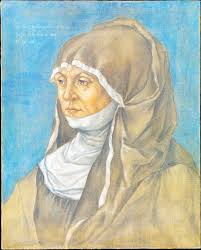 Venerable Caritas Pirckheimer was what today we might call an empowered woman. But she was not empowered in the sense of having no morals, rather, she was radically strengthened by Jesus! Born into an upper-class family in 15th-century Germany, Caritas entered the monastery school of St. Clare in Nuremberg at age 12. She eventually joined the community, which elected her abbess at age 37.

Sister Caritas was heavily exposed to the classical literature of the time by her brother Willibald, but surely it was her assiduous meditation on Scripture and the Church Fathers which gave her a highly spiritual, intelligent, and well-ordered mind. She did not keep her learning to herself, but fervently spread the fruits of her labors among her sisters, making her community a veritable powerhouse of holiness renowned throughout Germany.

There was another spiritual trend snaking through her country, however. Luther’s 95 Theses were nailed to the Wittenberg Cathedral in 1517 (at which time Mother Caritas had been abbess for 14 years). His teachings spread like wildfire. In 1524, the Nuremberg City Council voted to accept Luther’s teachings, obliging all religious institutions within their jurisdiction to do the same. Venerable Caritas’ community was deprived of the sacraments (except occasional reception of the Eucharist from an underground priest) from 1524 until 1529. But inspired by the cloud of witnesses that had fought to the grave in the face of heresy, the intrepid Abbess battled to preserve her community and their way of life by arguing that although renewal was needed in the Church, it had to come from inside the Church, not by forming a new sect such as Lutheranism. In addition, she argued that vows such as her community made could not be dissolved just because of a new civic ordinance. Therefore they were morally obliged to continue in the footsteps of St. Clare. She recorded all this in a journal she kept during this struggle.

Remarkably, the council eventually let her community continue on as before, although new members were forbidden. Venerable Caritas Pirckheimer died a few years later in 1532. Lutheran preachers continued to give weekly sermons to the sisters until 1565, and the last sister in the monastery died in 1591.

A Scriptural Prayer by Venerable Caritas Pirckheimer (One of Many)

you willed to become a man

and a little child,

without speech, nursed with milk, weeping,

and placed in a manger.

in place of milk grant us overflowing sweetness;

in place of tears, the joy of salvation;

in place of muteness, fullness of eternal life;

in place of swaddling clothes, the garment of immortality;

in place of the little manger,

the Paradise of joy and eternal blessedness. Amen!