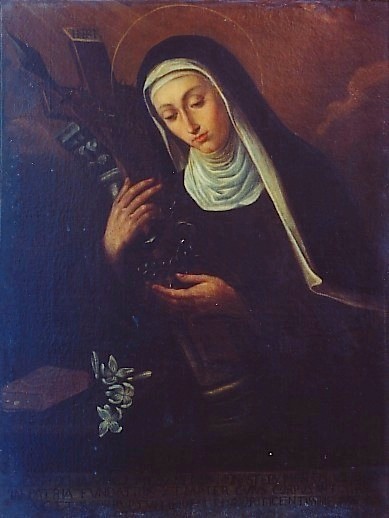 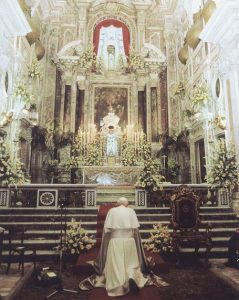 Not long after an Italian noblewoman, Countess Matilda de Calafato, joined the Franciscan Tertiaries (a Secular Order of lay people who live the charism of St. Francis in their everyday lives), she finally had a child. Esmeralda Calafato was born on March 25th (the Feast of the Annunciation) around 1430. She grew up to be attractive and quite eligible for an advantageous marriage. In fact, her father, Count Bernard engaged her twice but she would not consent to marry. Instead, she desired to give her life to Jesus with an undivided heart. At home she expressed this love through prayer, penance, and seeing her Christ in the poor. It was the same profound consciousness of the presence of God in other that has animated other saints and would later inspire St. Teresa of Calcutta in our own day to dedicate herself to helping the poor in a radical way.

But Esmeralda’s heart longed to abandon everything to cling to Jesus alone through a complete emptying of herself. For her, this meant entering the Poor Clares. So after the death of her father she knocked on the door of the Urbanist Poor Clares of Basicò and began a life totally dedicated to the search for God in contemplation. When she received the habit, the symbol of beginning a new life in Christ, she was given the name Eustochia.

Life in a Poor Clare monastery, just like human existence anywhere, has plenty of difficulties even without larger trials such as the persecution Eustochia experienced. Yet, she embraced all sufferings with a cheerful Franciscan heart out of love for her Divine Spouse. As an early biographer said, “She filled herself with God in prayer, only to pour herself out on her sisters in a thousand ingenious acts of charity.” When a deadly illness struck the community, she cared for the sick sisters as she had once cared for the poor, regardless of the great personal risk in so doing.

You might think she had given enough to God. But the tricky part of loving Him is that you always want to give Him more! Such was Eustochia. A burning desire arose in her heart to follow the Primitive Rule of St. Clare, which was even more intense than the mitigated rule she was observing.

With Church approval she started a new community in Messina that would observe the Primitive Rule, but… because she was only 27 and due to a long series of setbacks, it was three years before she was able to assume her responsibilities as abbess. Then, almost all her sisters, going back on their word and intimidated by the violent attacks of heir relatives, abandoned her. Only Sister Jacopa Pollicino, who would later become her biographer, stayed on.

After moving from place to place because of unstable buildings that collapsed, and other misfortunes, the sisters finally settled down and began to attract followers. When food was scarce, Eustochia was known to nonchalantly make the Sign of the Cross over the few pieces of bread that were left, and the Lord would turn them into enough to satiate all the sisters. Besides that, they had to collect the leftovers in several baskets, just like the loaves and fishes in the Gospel

In addition to a host of physical ailments, Eustochia was eventually blessed with the Stigmata (the wounds of Christ in her body). No wonder legend has it that a start rose from her monastery when she died in 1484! Her incorrupt body is still preserved in the monastery in Messina. Pope St. John Paul II canonized her in 1988.